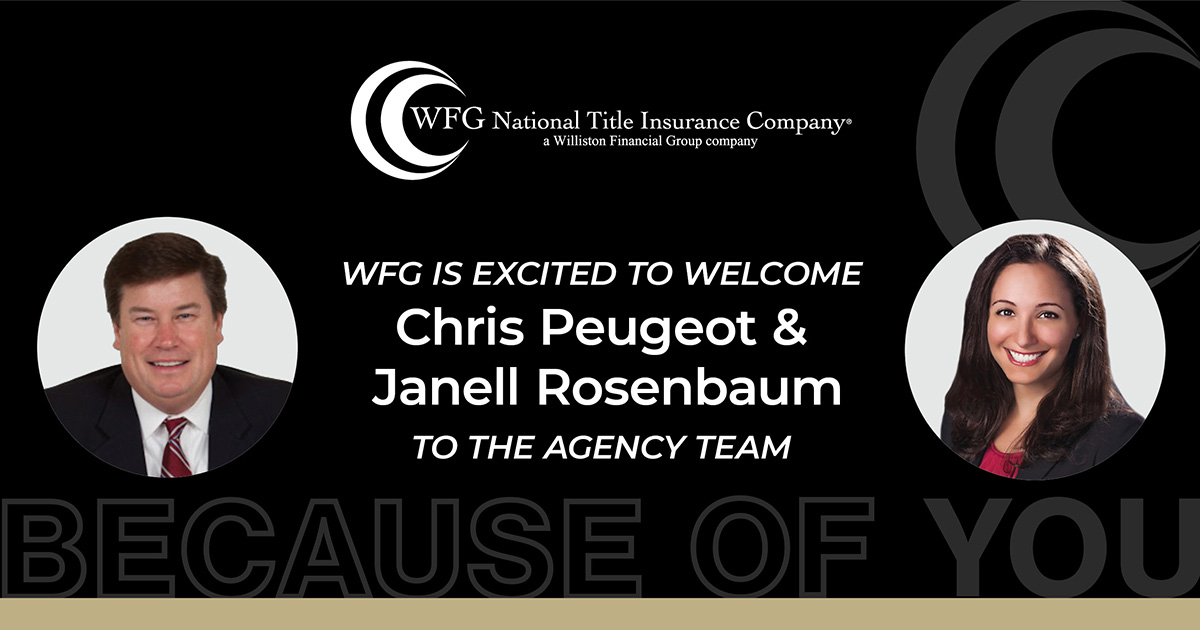 Rosenbaum will work with agents in upstate New York, Connecticut and New England while Peugeot, based in Nashville, will handle those responsibilities for agents in Tennessee

“Chris and Janelle are highly regarded in their respective professions and regions,” said Gene Rebadow, EVP for WFG’s Eastern Region & Agency Sales. “They have stellar reputations for helping build company market share, but more importantly, for doing it through customer-focused interaction. Many agents in the Northeast tell me that Janelle has helped them strengthen their businesses. And, among the many who have sung Chris’ praises is WFG founder and Executive Chairman Patrick Stone.”

“I worked with Pat Stone and long admired WFG for how it runs its divisions,” said Peugeot, who will be headquartered in Nashville. “So I’m excited to represent the company here in Tennessee.”

Rosenbaum, who will be based in New York City, was also attracted to WFG through its reputation in her region.

“For years I have been hearing about WFG’s incredible team and incomparable technology,” she said. “I look forward to using the new resources at my disposal to help my agents succeed.”

Peugeot has more than 27 years of title insurance sales and management experience, most recently as VP Sales & Business Development (Producing Sales Manager) at Foundation Title & Escrow and before that as Sr. Account Executive for Data Facts. Earlier in his career he served for 14 years as AVP/Sales Manager for First Title. He lives in nearby Franklin, Tennessee and is member of the Nashville Mortgage Bankers Association.

Rosenbaum spent the previous five years as Senior Underwriting Counsel and Agency Representative for Title Resources Guaranty Company (TRG) in New York City. There she worked closely with title agents and lawyers in New York, Connecticut and Massachusetts to build market share, while monitoring title agents for audits, revenue and remittance trends. Among her other previous positions were Assistant Vice President, Associate Counsel at Fidelity National Financial; Associate for Litigation at Sankel, Skurman & McCartin, LLP; and as an associate for commercial litigation at Platzer, Swergold, Karlin, Levine, Goldberg & Jaslow, LLP, all based in New York City.